Boat Race Officials (BROs) are a vital part of Rowing ACT who volunteer their time to ensure that every regatta is fun, safe and run to a high standard.

The BROs are managed by Chief Boat Race Official Geoff Northam, and are supported by Host Club volunteers each regatta.

What does a BRO do?

There are a variety of roles BROs carry out during a regatta, some requiring specific skills and some not. The standard roles required for a Rowing ACT regatta are:

Referee: The head official for the regatta, the Referee oversees all aspects of the day’s racing.

Judges: Situated at the Finish line where anticipation and excitement is high, Judges watch as boats cross the line and ensure that the correct finishing order is recorded. A fantastic role where you get to witness all the results first hand!

Starter: Positioned on a platform with great views of Black Mountain and the Governor General’s front garden, the Starter is responsible for aligning boats and getting each race underway to a fair and safe start.

Umpires: In the thick of the action, Umpires follow each race up the course ensuring that the boats stay in their respective lanes and are abiding by race rules. The best seat in the house!

Boat Drivers: A great role for anyone who enjoys driving a boat and being out on the lake, Boat Drivers drive a Rowing ACT tinnie up the course following each race with an Umpire on board.

Timing Official: The Timing Official is part of the Race Administration team that works in front of the Finish line. They manage all aspects of the timing system, and get an unbeatable view of each race.

Finish Recorder: Setup at the Finish line along Black Mountain, the Recorder snaps a photo of each boat as it passes the Finish line. This is the place to be if you enjoy watching great finishes! 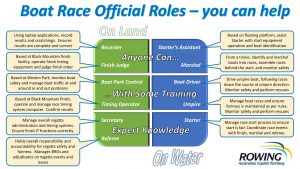 BROs are among the most valued people in the Rowing ACT community. Without their dedication and support, there would be no rowing in the ACT. It’s a great way to give back to the sport while increasing your own involvement.

During a regatta, our BROs are kitted out in Rowing ACT uniforms and provided with coffees, lunch, snacks and drinks. Following pack-down of a regatta, BROs are invited to come and enjoy some refreshments on Rowing ACT in Weston Park and relax after the day’s work.

Each BRO role is carried out with a money-can’t-buy view of ACT regattas. Whether its at the Start, following races up the course or overlooking the Finish line our BROs get the best seat in the house.

The BRO group are a great bunch of people and come from all walks of life. Being a BRO is a great way to meet new people and interact with others in the rowing community. Rowing ACT holds social events during the season for BROs and their partners as a way to show appreciation for their tireless work.

Rowing ACT run free BRO Training Days before and during each season. At the Training Day BROs are taught the varying roles and the skills required to carry out their tasks successfully.

The next BRO Training Day is: Saturday 21 October 1:30-3:30pm at the CGGS Rowing Sheds, Yarralumla

For BROs who want to officiate at a higher level, National Official Accreditation Scheme courses are available. Please contact the RACT Executive Officer if you’re interested.

BRO roles that drive boats require a tinnie license. Rowing ACT will reimburse tinnie license fees at the conclusion of each season.

Want to be a BRO?

Fantastic! We are always in need of new BROs. The next step is to notify the RACT EO of your interest by emailing eo@rowingact.org.au. We will be in touch with you shortly after that and look forward to you joining our valued group of BROs.