Pat started rowing in Canberra in 1964, the year the Lake filled and competition began.

Pat has a long history of service to rowing in Canberra and was a committee member of the then ACT Rowing Association as early as 1967. He has been Vice-president, Treasurer and Secretary in both Rowing ACT and the Canberra Rowing Club over the decades since, as well as being Captain and Vice-Captain in the Canberra Rowing Club. He was a Committee member/Director of Rowing ACT for 14 continuous years and only stepped aside in 2017 to make way for others. Pat remains RACT’s and CRC’s Public Officer.

Pat has always exercised a whole-of-rowing approach and has been a strong advocate for expanding participation in the sport. He has an encyclopaedic knowledge of rowing, particularly in the ACT. Rowing has greatly benefited from Pat’s contributions and the Board proposes his contribution be recognised by Member Clubs.

The Resolution was passed 22 August, 2018.
A fitting recognition of Pat for his many years of valuable service to the sport of Rowing in the ACT. 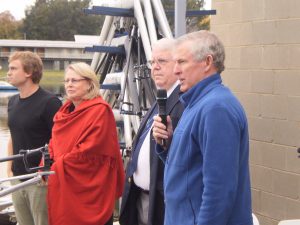